Don’t you just hate that moment when you realize that somehow, someway, somewhere you managed to accidentally get gluten into your body? Most people call this getting “glutened”; some call it getting “glutenized”. We need to get Webster to add glutened to their dictionary.

I’m sure most celiacs would agree, there isn’t much worse than realizing you’ve been glutened, and dealing with all the symptoms that come with that. I can remember that as a newly diagnosed celiac, I asked my friend and celiac mentor how I would know if I’d been glutened. “Oh you’ll know”, she said. She was right!

While symptoms of a gluten reaction vary from person to person, and can hit at varying intervals from time of exposure, you’ll soon learn how your body reacts.

The next step is playing detective and figuring out what got you so that you can avoid that in the future. Sometimes, it is impossible to figure out the exact source, as there were too many possibilities, but often you can narrow it down. 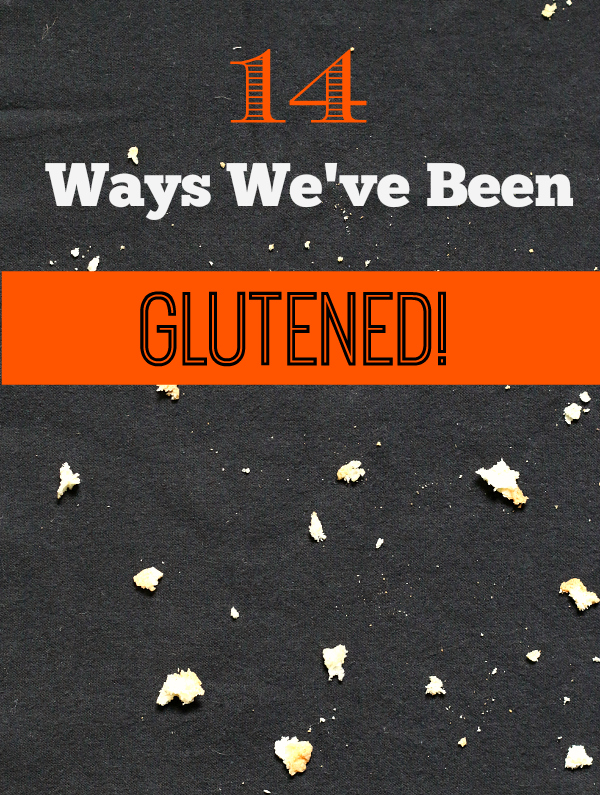 I started making a list of the various ways I’ve been glutened over the past 4 1/2 years since my celiac diagnosis, then I decided to contact some of my fellow bloggers asking them to share theirs also. Hopefully this list will help you avoid the misery from getting glutened!

Thanks to the following bloggers for contributing their experiences to this post: gfJules, Faithfully Gluten-free, gluten free easily, Gluten is My B****.

How have you been glutened? Share your story so it helps someone else!

Ever since I started making breakfast for my mother in law who came to live with us, I have been glutened almost continuously. I wash my hands after making her toast or an English muffin, and after rinsing her plate. I don’t know how, I am getting it into my system.

I'm kind of surprised i haven't seen more of this. My closest friend told me they were gluten free in their home. I trusted her because i had known her for years, my whole life to be exact! People make simple small mistakes, THE BUTTER DISH GOT ME SICK FOR 3 DAYS! SHE felt Awful needless to say! I have also been glutened by mayonaise jars, i Don't buy them anymore! Unwrapped candies or chips are very common also.

My daughter got glutened at school bc they rotate classes and a 5th grader popped a homemade stress ball in the class she was headed into at the desk she sat at no less.

I made french toast for my husband and myself. I made mine first so it wouldn't be glutened and then made his, after using the spatula to remove his from the grill, I did not use it to remove mine, but without thinking transferred mine that had been keeping warm with the same fingers that had picked up the gluten bread to dip in egg mixture and onto the grill. I just didn't think. Next time, wash hands after touching the gluten products and use a new spatula for mine. I guess I didn't think that would be enough contamination to make me sick. Will know better next time.

We celebrated my birthday Sunday with chopped BBQ beef sandwiches, I just ate the BBQ, baked beans, I oversaw that as well. I did pull the buns from the bag to set them out. My brother made me special potatoe salad without eggs for allergy purposes. I also made canned cinnamon rolls for the grandkids that morning. Monday and Tuesday I was really sick! My thoughts are either the cinnamon rolls which I didn’t eat or lick my fingers or my brothers mayonnaise had gluten in it from sandwiches. What are your thoughts? I’ve only known I’ve been Celiac for about 6 months so just figuring all this out.