The kitchen smells amazing when a loaf of this gluten-free apple bread is baking! It’s a favorite gluten-free sweet bread. 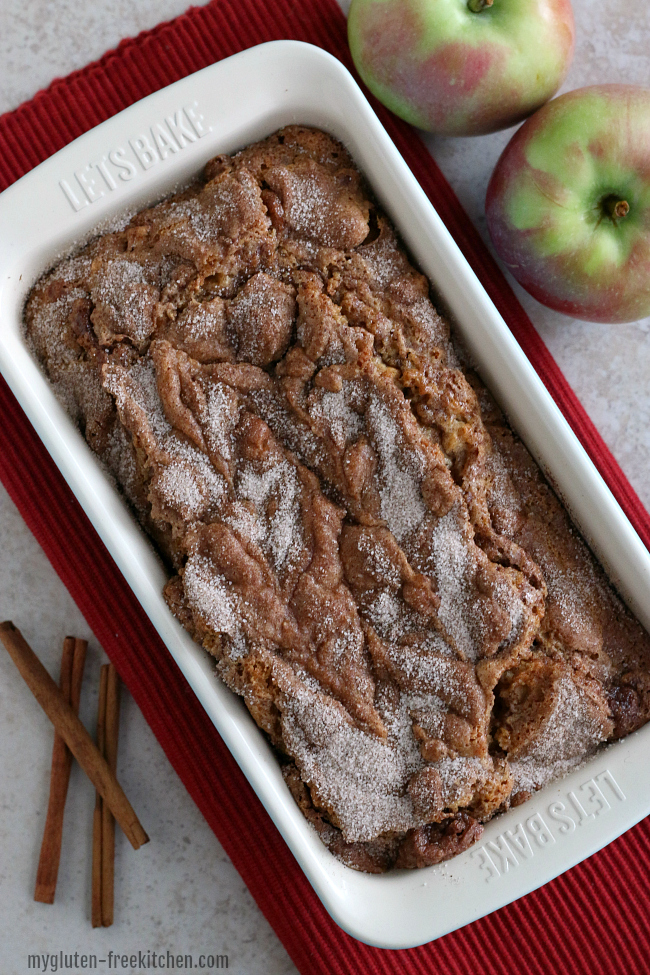 A slice of this gluten-free apple bread is perfect alongside your morning cup of coffee, or for a mid-day snack. Or even for dessert with a cup of decaf! 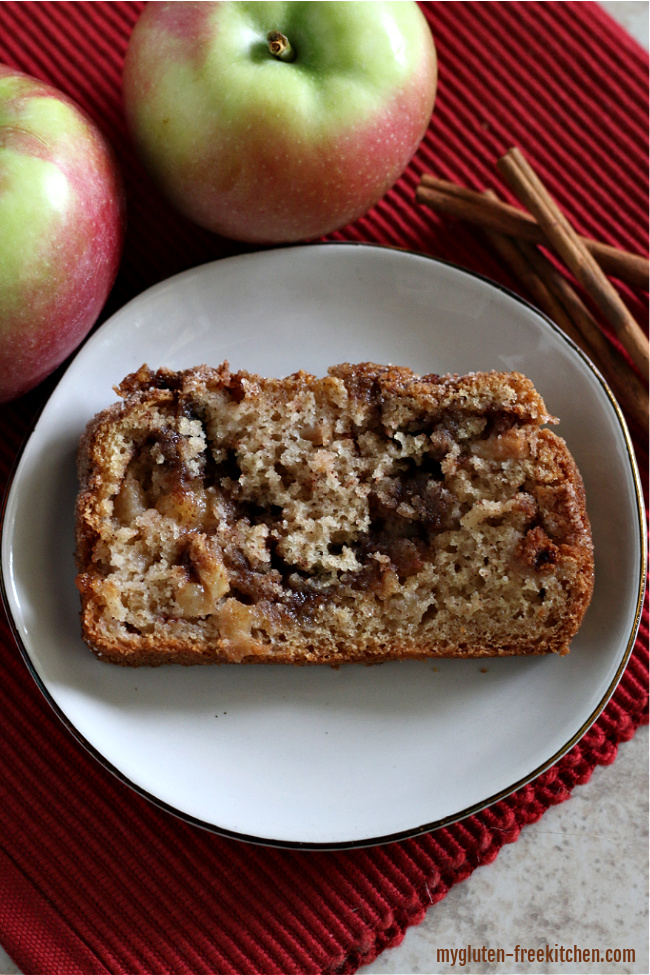 How to make this gluten-free apple bread:

Grab your stand mixer or hand mixer. Mix up the wet ingredients (buttermilk, egg, oil, and sugar) until mixed.

Dice an apple and mix with cinnamon. Grab a spatula and stir in the cinnamon apples into the batter.

Here’s a look at before and after baking this apple cinnamon bread (you can see the swirling back and forth I did): 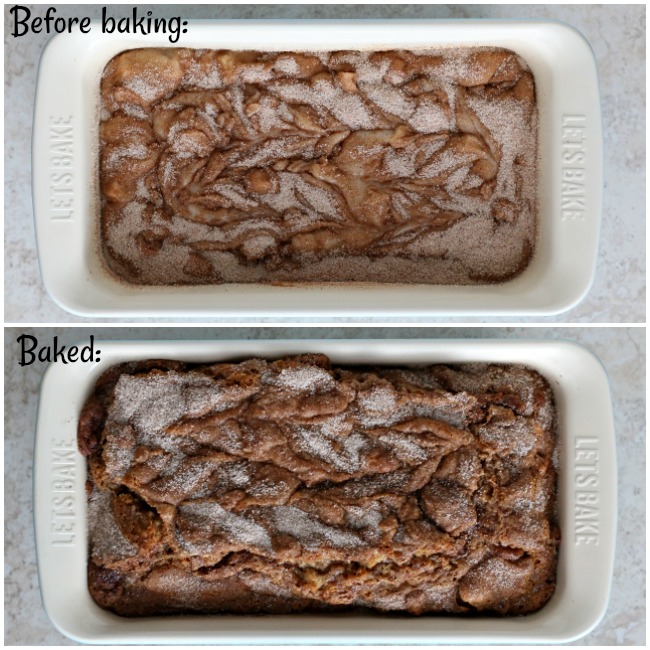 You’ll know this is done when a toothpick or wooden skewer inserted into the baked loaf comes out with moist crumbs only, no wet batter. Given the wet apples inside, you might have to poke a couple spots to be sure.

Notes on ingredients and substitutions for this gluten-free apple bread:

As you can see, most all of these ingredients on hand already! 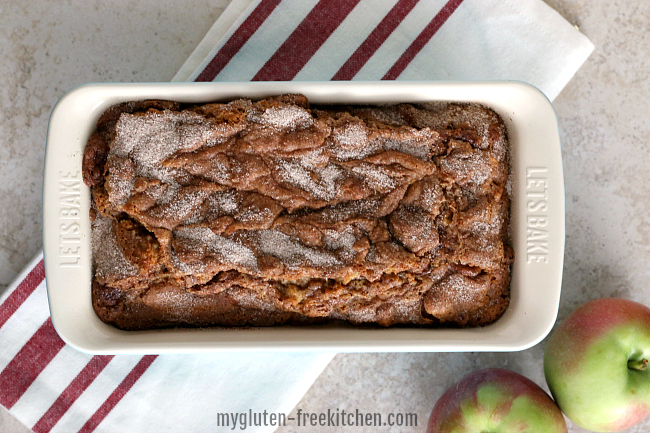 I actually tried this apple cinnamon bread with a glaze and found that I much preferred it with this cinnamon/sugar topping instead of a glaze.

So try it this way first with the cinnamon sugar topping. If you want to add a glaze on top, simply mix together milk and powdered sugar to the consistency you want and drizzle over the gluten-free apple loaf.

This gluten-free apple bread would be a great addition to any gluten-free brunch you’re having. Here it is sliced up and ready to serve: 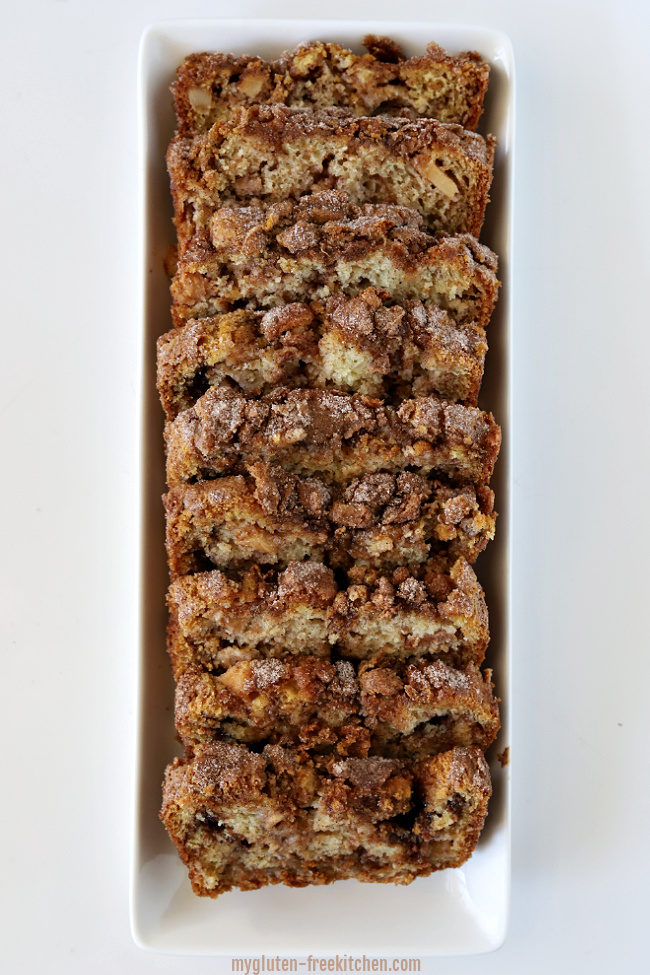 I ate slices of this gluten-free apple cinnamon bread plain. But you can totally slather a slice with butter or apple butter! 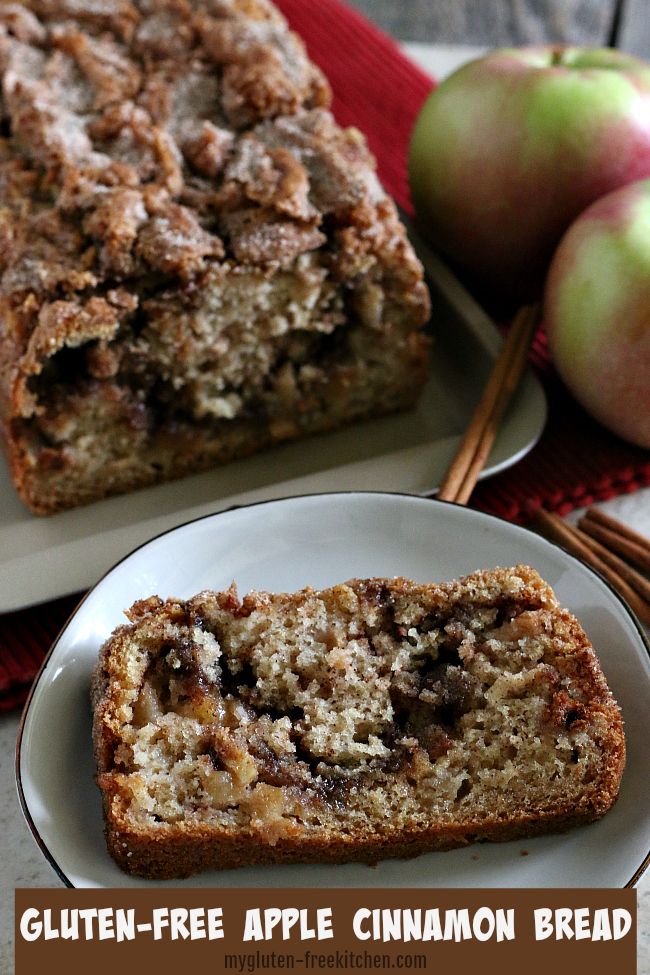 If you make a loaf of this gluten-free apple bread and love it, please come back and give this recipe a 5 star rating in the recipe card! Feel free to comment with tips or to share any successful substitutions you made.

*If using a gluten-free flour blend with xanthan gum or guar gum already in it, be sure to omit the xanthan gum called for in the recipe.

You'll know this is done when a wooden skewer or long toothpick inserted into the baked loaf comes out with moist crumbs only, no wet batter. Given the wet apples inside, you might have to poke a couple spots to be sure.

I ate slices of this gluten-free apple cinnamon bread plain. But you can totally slather a slice with butter, margarine or apple butter.

Pin this apple cinnamon bread to your gluten-free quick bread board on Pinterest: 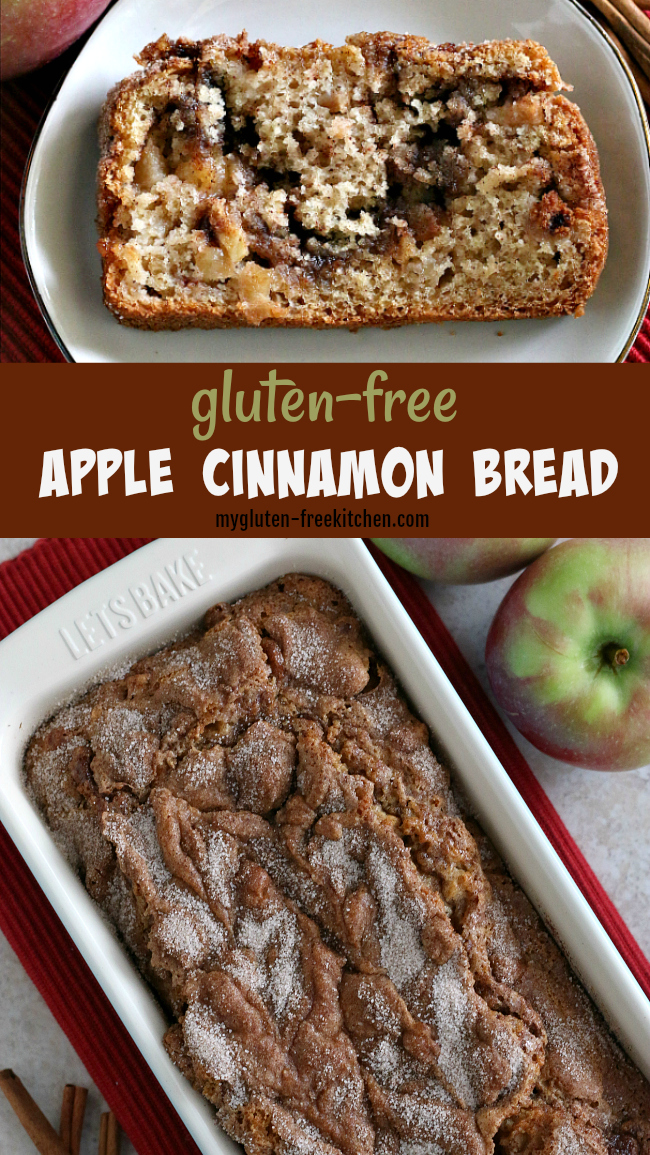 I hope you and your family enjoy this gf apple bread as much as my family does!

I was on your site because I really wanted your Apple Crisp reciepe, once I started gathering ingrediants I found out my apples had gone bad and I was left with three useable, not enough. So I searched through your recipes that was 'easy enough' and used less apple, THIS LOAF was AMAZING!! Thank you for the save! I was so disappointed about not gettin my apple crisp, and now I'm thrilled that I ran into the problem and found this! I'll be back, to try other reciepes. So very thankful that you can share your wisdom and skills so that I can use my limited abilites to produce a great treat. Thank You Sincerely!

This was wonderful. Made for a group that mostly are gluten eaters, just me who is gluten free. It was gobbled up! I did reduce sugar amount in the bread to 1/2 cup, might reduce to 1/3 next time as apples and cinnamon sugar swirl make plenty sweet. Thanks for a great recipe.

This was absolutely delicious! I used Better Batter's Artisan Blend flour and it came out great. My apples were pretty sweet, so I wish I had cut back on the sugar a bit. I think a really tart apple would be best next time, but if I don't have that I'll just use a little less sugar. Thanks for a lovely recipe!

Found you on Pinterest. I made your GF apple cinnamon bread and it was sooooo perfect!! I'm hosting a brunch and though only one guest is GF, I made it for everyone because it's THAT good. I'll be checking out more recipes of yours now. Thank you!